Why Designers Need to Write

A couple of years ago, there was a huge discussion online about whether or not designers should know how to code. The people who believed this argued that unless you know how to build what you design, you aren’t able to understand if it’s doable or not. I strongly disagree with this way of thinking.

I think a large portion of our job as designers is to push boundaries by envisioning things that just aren’t doable – either from a technical or practical standpoint. This discussion then evolved from if designers SHOULD code to WHICH programming languages they should learn and broke off into even deeper silos.

However, I do think there’s at least one language that a designer needs to master. It’s their native tongue and, possibly, a widely spoken language (aka English, Spanish, or Chinese). In order to present our designs to the world, we need to use this language to describe our drop-shadows and perfectly selected pastels (if that’s your thing!). There is no better way than the spoken/written word.

A core skill of the interaction designer is imagining users (characters), motivations, actions, reactions, obstacles, successes, and a complete set of ‘what if’ scenarios. These are the skills of a writer — all kinds of writers, but particularly fiction, screenwriting, and technical writing.Susan Stuart

It’s been two years since I started writing regularly and I can honestly say that nothing has affected my design as much. Not just the designing itself, but how I relate to the entire process – the scenarios, all the stages of iteration, and the final outcome.

Some may argue that if you have to explain a design, it’s not intuitive enough. There’s even the saying that UX is like a joke, if you need to explain it, it’s not that good. But as John Maeda concludes “Words are really important because the graphics don’t make sense sometimes.”.

I believe that design, regardless of discipline, is essentially about solving problems. I like to start my design process with an old-school piece of paper and a pencil. I’m terrible at drawing but this allows me to only focus on the pure basics. I write down words that I want to associate with each function of the design. What problem is this part solving? What kind of characteristics does this feature hold? Why is it needed? I try to keep it as simple as possible while focusing on the problem, not the framing of it.

Writing about user experience design forces me to focus on the problem – and the solution – just like designing on a paper does. I will never be able to prove the reasoning behind a solution if it is hidden behind a design that is all coded up and ready to go with fancy graphics that hide any shortcuts. If I can’t explain the process with words and a basic drawing, it’s just not simple enough.

As the importance of user experience — and it’s effect on revenue — grows among companies, they’re slowly starting to realize the value of words and tone. A brand that has been great at this for years is Dropbox. I’ve always found the design of the service itself great (it hides away until the moment I need it), but to make that design really work – they needed great writers.

In most interface writing, it’s important to shut up and get out of the way. Most of the time, you don’t want to force users to read. They’re trying to get something done, and the last thing they want to do is stop and read your interface.

But sometimes, you do want people to notice your words. That’s when you want to speak up and be heard, loud and clear. Maybe the user did something awesome, and you want to shout it from the mountaintops.

Now, as a team of one, hiring a writer isn’t really an option for me (except for my brilliant editor Josh, who’s been with me for years). I need to be able to tell these stories myself. It forces me to understand my entire product and, ultimately, it makes me a better designer.

Great example of how writing creates a better product by Slack: 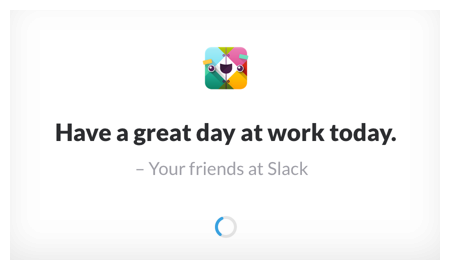